Talking about attention, it can never be separated from human life. When we were born, our cries would be the center of attention, happily welcomed especially by our parents. When we were babies, we learnt to speak, our funny babble would get fully attention from our parents and it entertained everyone who saw it. And when we learnt to walk, our parents would applaud when they saw us taking the first step. Their attentions encouraged us to take the next step. So basically, attention is something that can motivate. As we grow, we will get attentions not only from our parents or family, but from a broader scope as we start interacting with many people. And we will get more variety of attentions.

Now let’s talk about the relation between attentions, the way people express themselves and the internet, particularly social media. On twitter, people will be glad if their tweets get many retweets, favorites, or replies. A good tweet will attract many followers. On facebook, people will be happy if their posts get many likes and comments. Likewise in Instagram, people will be happy if their photos or videos get a lot of likes and comments. People are eager to upload good photos on Instagram, whether it’s the picture of them or things related to fashion, artworks, photography etc. Retweets, favorites, likes, and comments on social media are the examples of attention. Although we initially just wanted to express ourselves, but if we get those kinds of attentions, we will be happy and feel appreciated. Just like in blogging. We will create a blog with the name, title, and good design to make it look attractive. We will make our posts as good as possible. We will be excited if we find people who have the same interests with us.

In my opinion, the use of internet as the way to express can give positive things like the followings:

• Helping people to express themselves
Not everyone is easy to express themselves. Someone who is shy and not really good at speaking, sometimes feels more comfortable to convey their thoughts, experiences, or anything about them in writings. So, some media like twitter and blog are good places for them. We might already hear some stories, such as there is someone who is very active talking on twitter, is actually a nerd in real life. Or people who are very good at writing blog posts are sometimes very awkward in their real social lives. That doesn’t mean they are fake. They just feel more comfortable to speak through writings.

• Creativity and Self Improvement
The attention that we get is such as an appreciation of our expressions and works that drives us into a creative person and furthermore to improve. On twitter, people will try to make great words fit in 140 characters. The fashion people will be excited uploading their fashion stuff and styles, and will look for new styles to update their fashion looks. The photographers will increasingly produce nice photographs and he will further develop their abilities in order to get the better photographs. Articles that we make on a blog, we will read them over again before publishing it. We would edit, repair some parts, and checking the grammatical errors in order to publish good writings.

• Sharing Information and Knowledge
We can also share information, knowledge, and inspiration. A blogger’s article can be useful to people who need information related to this article. The fashion bloggers and fashion people on Instagram will inspire others with their fashion style, and it will probably be so helpful for people who have problems in fashion. The professional photographers could inspire people who love photography to learn more about photography. Social media and blog could be great places for sharing with people who have the same interest. They will give feedback and inputs to each others. And some make communities in real life that originated from their communities on the internet.

• Finding Talents
Many people who have certain talents, or who have great artworks but do not know where to share them. Internet is the right place for them. Many famous writers who have best seller books came from blogging. And many fashion consultants who were initially just bloggers who often wrote about their fashion styles or uploaded their fashion looks on Instagram. And there are a lot of stories of famous people who succeed because of their activities on the internet. From zero to hero.

So, there is nothing wrong with self-expression and the desire to get attention as long as we do it in positive ways. However, for some people, self-expression and attention seeking can be annoying if it is excessive and inappropriate. They think that wanting attention is okay, but probably the behaviour of people in doing it is sometimes way too much. For examples, some might feel bothered by those parody accounts on twitter or those who like copying someone’s tweets. Some might not really like to see someone who loves posting loads of selfies within a short time, and some might not like seeing people who keep showing off their branded stuffs.  I personally don’t mind people who love posting selfies, branded stuffs or things which are mentioned above. I think that’s their rights, and I don’t think those as excessive behaviour. Things I don’t like to see on social media are posts or pictures that full of hatred, racism, insult, or abuse. This is just my opinion, though. 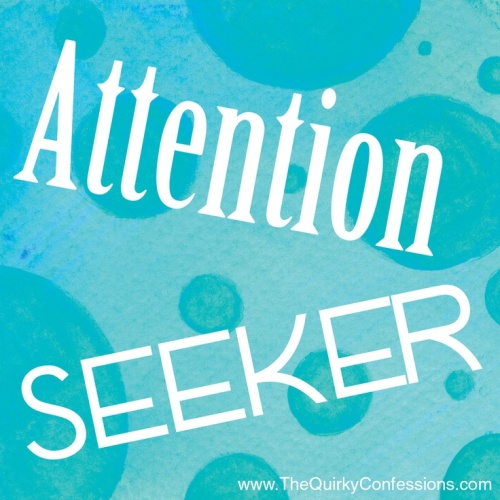 Excessive attention seeking behaviour is sometimes annoying for some people. But it’s not us to judge, because judgmental character can lead us to the bullying behaviour. We have all heard or read about people who committed suicide after got bullied because of their activities in social media. In my opinion, if you feel so annoyed by excessive behaviour of some people, the best way to do is ignoring them. For example, you can unfollow those accounts or block if you think they are getting so annoying, like spamming you or give you hatred comments etc.  But once again, it depends on personal. Some people are easily annoyed but some don’t even feel bothered by the excessive attention-seeking behaviour at all. Some decide not to be on social networking because they’re not interested, some are addicted to it. Well, my thought is, if you are on social media, don’t take it too seriously. Millions people are there, everyone has different personality, you can’t control them. So, take it easy. But, I think while we’re on social media, we also need to control ourselves in order not to be excessive. I mean it’s to protect us from some bad things. For instance, you might ever hear about some people who stole pictures of babies and abuse them. So, being wise on social media is needed.

Well, maybe this is all I can write. There is no intention to offend certain people here in my writing. The conclusion of my writing is, in my opinion, that the self-expression and seeking attention are not bad things if we do them in positive ways, and not excessive. This is just my opinion, and I do not impose my opinion to you. I’d be glad to hear your opinions too.Thanks for reading 🙂